I vowed to finish the game Koi to Senkyo to Chocolate before New Year 2016, and I’m glad that promise was fulfilled before the clock signed midnight and the night filled with beautiful fireworks. Here’s the review of the visual novel that got me so addicted for the past month. Spoiler-free, of course.

Note: there are 5 heroines in the PC version, but 6 in the PSP version. I will only explore the former.

KoiChoco has done an incredible job at telling a story of a normal student who has to push through different electoral obstacles, such as human rights, freedom and access to it, morality, discrimination, etc. to realize his own ambitions and the hope everyone entrusts in him. The novel shows the process of running a fictional election, based on many actual procedures and hurdles candidates have to face in an interesting, very detailed, and a bit dramatic way. It sucks the attention of the audience, keeping us on the edge of our seats.

Now to the building of each heroine’s route. You are immediately locked into Chisato route on the first playthrough, and only be able to explore other heroines’ routes once that’s done. Every segment of the plot holds, despite its value, a significant contribution to the heroines’ relationships with the protagonist and others, and character development. Hinting clues and key words while progressing through the story, readers are then encouraged to analyze the emotions and words of the characters in the story from 2-3 angles.

The H-scenes are relatively 5-10 minutes short, but they are only there, at least in my opinion, to give the heroine and the protagonist the opportunity to bond and formulate their love. Nothing too upbeat or hardcore.

Another great thing about KoiChoco’s system which I love is the moment when the story is locked into “auto-read” during the climax. It gives you not only the time to slowly digest the situation, but also to comprehend and sympathize  with the characters’ overflowing emotions. 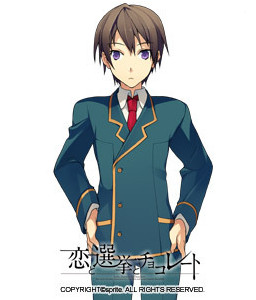 Our protagonist, Oojima Yuuki, is a normal high-school student, with average grades in academic and sports. He lives in an apartment with his mother; but due to her absence most of the time, he becomes exceptionally good at housekeeping, especially in cooking and baking. Childhood friend and neighbor with Chisato, they share a “special bond” that others, at first glance, can mistaken for love.

As the Shokken club is facing disbandment. He is, reluctantly, elected to run for Student Council President. His personalities change depending on the route, but these traits are consistent: easily discouraged and prone to act on his emotions, can be very determined once he decides to do something and seeing them to the end.

Sumiyoshi Chisato – A second-year student at the Takafuji Academy and is Yuuki’s classmate, club president, neighbor, and childhood friend (aka. pretty big deal!). She’s one of the founders of the Shokken Club. Facing disbandment, she nominates Yuuki to run in the election while acting as his campaign manager.

Chisato depends on Yuuki both emotionally and mentally. Her fixation and clinging behaviors on Yuuki are visible even to outsiders, showing jealousy at even the sight of Yuuki spending time with some girls besides her or Mifuyu. This leads others to believe they are dating. The truth is he acts as a lifeline to save her from breaking down (to escape from reality, might say). She is a very sweet and caring girl; however, this is only limited to people she considers as friends and family. Short-tempered and foul-mouthed, she will not hesitate to attack those who offend her friends or threaten to steal Yuuki away.

I like Chisato, but only in her route. Her jealousy tendency can be extremely annoying and destructive even (noticeably in Isara and Mifuyu routes). It’s not like I am ignorant of the protagonist’s importance in her heart. She just takes it too far at times, disturbing not only the election process, forgetting the goals, and even the unity of the Shokken club. That being said, she’s super lovey-dovey and dedicated to her loved one. Girlfriend material!

Kiba Mifuyu – She has known Yuuki and Chisato from their middle school days, and understand somewhat of the circumstances behind their attachment. Although in the same class as both, she is in fact one year older. This is due to her having an ill-ridden body which forced her to undergo a surgery, hence resulting in her repeating a year.

Though a very sweet and selfless girl, Mifuyu often puts Chisato’s wish above others. Perhaps one of the reasons people misunderstand Yuuki-Chisato relationship are Mifuyu’s fault. She very strongly believes that the two are meant for each other and tries to assertively promote their relationship status.

Honestly, I’m not fond of Mifuyu. It’s very difficult to explain without digging into her story. Mifuyu is portrayed as the mature one of the three who mediates between Yuuki and Chisato, yet her actions strike me as indecisive and immature, like a child wanting to eat both cakes yet refuses to admit so. She’s often torn by her own self-predicament, regretting over her decisions again and again. At least her childishness gives the protagonist the chance to grow strong.

Aomi Isara – A first-year financial aid student at the Takafuji Academy. In order to support her mother and two younger brothers, she enrolls through the financial program and takes on part-time jobs, which is prohibited by the school as it is deemed as distraction to the already-busy financial aid students.

Isara is depicted as a cheerful and energetic underclassman. Her trademark is her energetic and cheerful smile. Even when facing hardship, she strongly believes smiling can bring the strength to bear through the storm. She loves her family very much and is often conflicted when being seen as a burden to them. Due to her poor family income, she and many others with similar situation attend the school through a financial aid program, in which they are the target of discrimination by the general students due to the difference in status.

I fell in love with Isara, especially her smile. If you only look at face-value, her smile is full of happiness and vigor, and you can’t help yourself adoring it. Yet, as the story progresses, you learn the strength it takes for her to smile, and the pain she hides behind each. You come to not only treasure but admire her willpower and strength “to smile”. There are a lot of ups-and-downs in her route that makes you wish it could’ve turned out better, yet you don’t know how to end it more beautifully. Another thing, Isara is super cute when she does smile.

Shinonome Satsuki – A second-year student who belongs to the Financial Department of Takafuji. She’s one of the top leading candidates in the election. Her manifesto which aims to disband the Shokken is what pushes the protagonist to run in the election.

A cool-beauty, she is admired by both genders of the academy. Determined and strong-willed, Satsuki believes in the change of the school system, playing fair-and-square, and justice though this backfired later on. Her reform, however, does not pleased everyone as the Shokken is facing disbandment due to her prejudice. From a family of Eastern confectionery, she loves sweets, especially Western cakes (surprise!!). Satsuki and her half-sister, Shinonome Hazuki, are often at odds due to family-related problems.

Where do I even started…Satsuki’s character is very unique in many different aspects. Despite her cold act at first, she playfully teases the protagonist, often poking at his last name. Although she is smart and beautiful, she does not look down on others, and justly look at the situation from two sides, even bowing to apologize if she recognizes her mistakes. Surprisingly, she has a jealous side, which is humorous and so “cruel” to our Yuuki-kun. The only problem I have with her is her stubbornness, but even that can be cute at times. Best of all is whenever she eats sweet, she completes loses her cool aura and shows her dere dere side.

Morishita Michiru – A first-year student and Isara’s classmate. She’s a newcomer who joined the Shokken just before the election.

A quiet, mysterious, and expressionless girl. Yuuki first meets Michiru in the clubroom crawling under the table (with her panties showing, of course). Not much is known about her as she often secludes herself and only talks when ask, with very few nonspecific words. For some unknown reasons, she takes an interest in Yuuki and responds only to him, even stalking him outside of school. Due to a psychological event, Michiru can perceive the colors of the heart, enabling her to read the emotional states of others, however not knowing the reasons or thoughts behind them. Her behaviors are often associated to that of a cat, as noted by Isara, since she always disappears when classes end only to reappear before the next one starts, as if she’s searching for something…or someone (oooohhh!).

Michiru, in my opinion, is the sweetest girl of all. Although expressionless, she genuinely cares for the people she loves, being the only one to chase after Yuuki, when he runs away not wanting to run in the election, and encourage him. She gets lonely easily, yet she accepts solitude, because then she will not be hurt or be abandoned. Probably one of Michiru’s most prominent moments are, when facing a decision, she is willing to sacrifice her happiness in order to protect her loved ones, even at the cost of being hated and alone again. Something about Michiru that makes you want to protect that strong little feline-like girl – to be there for her. Oh, and did I mention that whenever the protagonist strokes her head, she gives a very warm and gentle smile. Aw mah gawd..!!!

It’s undeniable that Koi to Senkyo to Chocolate is one of the best visual novels I’ve played. The story was very engaging, interesting, and each route offers something unique to the character themselves. Best of all, though gameplay>50 hours, the novel allows the readers to digest the flow of information and become a part of the adventure. There are times when you wish the ending or the plot could go a different direction, something more happy-ever-after, but in the end, it’s the only ending that could ever be.

TL;DR: DEFINITELY A MUST-PLAY. DO IT!!

Thanks for reading this. I hope you find this review helpful (enough to play the game!!)