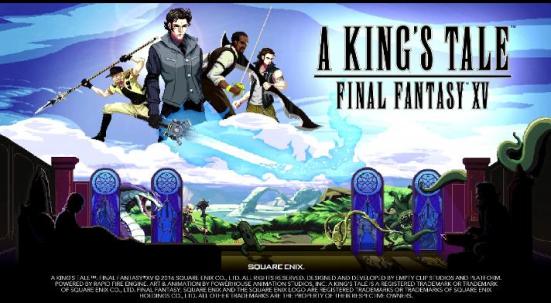 Whilst Final Fantasy XV profiles the story of Noctis and his road to becoming king, there are other characters present within the universe that once had access to the power of kings. If any fans are left wondering “What happened before,” A King’s Tale gives us a snapshot of the past in a very creative and entertaining way.

Available originally only to those who preordered the main game, A King’s Tale was recently released as a standalone minigame that is completely free to download. It is an arcade style, slash em up adventure. Chronologically, the game takes place during Noctis’ childhood in the form of a bedtime story. A story that depicts one of the adventures of King Regis back in his glory days with his own personal entourage. But did it actually happen, or is it just a story? I’ll let you decide.

In true arcade style, the story itself is short and sweet, with a timer feature to give all the speedrunners out there a nifty challenge. It’s simple controls allow the player to easily use each technique, which becomes very important for fighting the multitude of different monsters Regis will face, each with their own weaknesses for you to exploit. If none of that is enough, the final boss will be a real treat for all long time Final Fantasy fans.

So you’ve completed the story, then what? Well, you gain access to the dream battles. Here, you can take on additional challenges using all of the skills you learned throughout your adventure, and compete with your friends for the best scores and times. Some of them are pretty tricky whilst some of them are quite straightforward, so be prepared for a fight either way and you’ll be fine.

That’s basically all there is to it. It is only a free to download arcade minigame, so don’t expect too much. However, what you do get is a brilliantly executed time killer that even fills a story gap for some of the more curious minds.