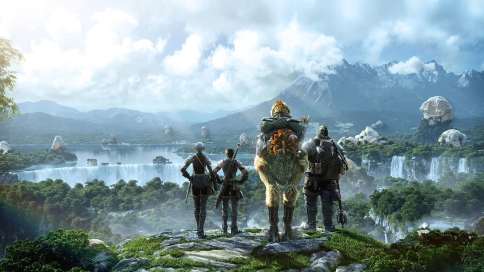 Back in 2010, Final Fantasy XIV was released onto the PC. In the shadow of its predecessor, Final Fantasy XI, fans had very high expectations and were thoroughly disappointed with the product. Causing the developers to do something very clever. Kill the game, spectacularly, and use the cataclysm to set the scene for an improved title. Hence came Final Fantasy XIV 2.0, more commonly known as A Realm Reborn, released in 2013 and to this day stands as on of the best MMO experiences available.

You play as an adventurer arriving in the land of Eorzea, a land in fear of invasion form the Garlean Empire and still torn from the cataclysm wrought by the elder primal Bahamut. Depending on your choice of starting class, you will begin in one of the three city states of Eorzea. The woodland city of Gridania in the Black Shroud, The maritime havenl of Limsa Lominsa in the coastal region of La Noscea, or the lavish capital of Ul’dah in the desert lands of Thanalan. The first part of the story varies slightly depending on your home state, but follows the same plot and quickly converges into a single storyline.  As usual, I shall not spoil the story, but trust me, its good.

The combat classes are split into three roles as usual for games of this genre: Healer, Tank and Damage. However, unlike other titles, this game offers a unique class system absent in many similar games. After reaching a certain level and completing the quest pertaining to your chosen starting class at that level, you may freely choose between any of the classes available whenever you so choose, without consequence. It also features a very extensive crafting and gathering system which can be levelled alongside your combat classes.

The base game of Final Fantasy XIV: A Realm Reborn features a fairly long storyline for players to experience between levels 1 to 50. The amount of content within this is satisfying enough and can keep casual players occupied for weeks. Players who wish to continue their adventure to level 60 and experiment with three new classes, may journey to the Northern city of Ishgard in another full game’s worth of content set around a perpetual war between dragons and men. Further than that takes players to level 70 and two new classes in a journey to Ala Mhigo and Doma in an epic fight for freedom. Beyond that, who knows, but judging from the story so far, its going to be epic. Or if you aren’t too bothered about the story, you can purchase the ability to skip the story and dive straight in at level 60, albeit at a hefty fee.

The monthly subscription model can put a lot of potential players off. If you are unsure if this is the game for you, there is a free trial in which you can participate, giving full access to the game up to level 20. Those willing to pay the subscription fee are welcomed as part of a large and friendly (mostly) community of players from all over the world.