Sensei, I will be writing editorial posts to discuss some aspects of some the themes in anime and manga. These posts will be online on Fridays. Oh okay, and I get to make an appearance? Yes, and now the first post will be about  KONOSUBA -God’s blessing on this wonderful world! 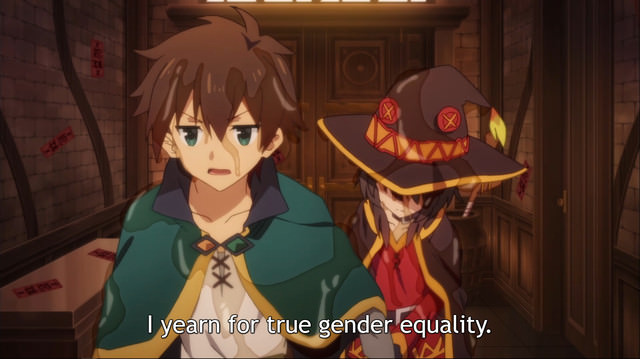 The main draw of the show’s, in my opinion, is the fact that instead of making just Kazuma as a weak moral character, but also the entire harem around him with many falling as people to add to the comedy. Yep, something is wrong when the most moral character in the show is a litch.;Wiz is the best girl, come at me.

Some of the classic anime have main characters will failing to allow for comedy. The shows like  Yu Yu Hakusho‘s Yusuke Urameshi and Ghost Sweeper Mikami‘s Tadao Yokoshima. Both are generally moral people, but had many of the failings one would expect of a teenage boy: perverted, insensitive, and just generally causing trouble.  They will then have a moral anchor in the forms of a companion or love interest to slap, kick or punch them into the right path. 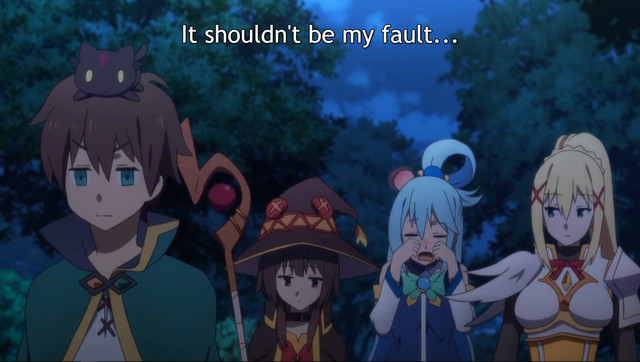 What happens when you make all the important characters toss that morality out the window? We have Kazuma who is a lecherous and abrasive and has no plans of defeating the demon king, Yet, these aspects of his make a refreshing MC to the other isekai travelers. If Kazuma is the in-moral cake of the show then his three companions are the icing that is at least as bad as him. There is no angel or pure-heart heroine to purify Kazuma. Having characters with a good heart, but a rough exterior allowed them the chance to grow and develop, but when this is not available  then we get the chance to experience the best comedy that the show has horned over two seasons.

We have the everyone’s favorite, the explosion junkie Megumin, has also been stepping up as perfect fodder for Kazuma in season 2. She has earned her place as the show’s waifu. Wiz is still the best in my heart. Next, we have the masochistic holy crusader Darkness. She returned in full force in season 2, having gone so far into the realm of fetishizing her own pain and humiliation to the point that Kazuma can no longer even insult her without feeding her complex further. Last but certainly not least, is Aqua. She is as bad as Kazuma, and she is always competing with him to see which one of them can cause the biggest screw-ups. Neither of them will let the other’s failures go unnoticed, nor their own successes go without a good long stretch of gloating.

All these things are marks of amazing writing from the author, and his skill to create human trash characters. These guys are not your shining hero party, nor are they good people. In the end, they are just are party or a family living in a fantasy world.

4 thoughts on “KONOSUBA -God’s blessing on this wonderful world: Making Humans by Tossing”