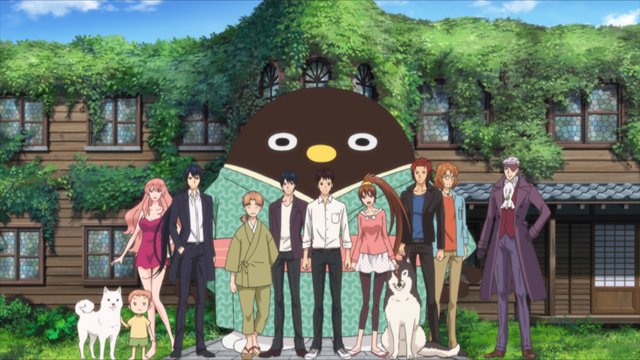 Not quite, Enaba was not born with the ability to see Youkai and he has this ikemen mary sue best friend looking out for him since middle school. He was saying goodbye to his friend to move into his high school dorm, so he does not trouble his uncle’s family anymore. Unfortunately, his high school’s dorm burns down, which results in him moving into a yokai apartment house. Shenanigans have been set up and will doubtlessly ensue.

What didn’t you like about the show? The design of the yokai and ghosts were really well drawn and there’s truth to that. A spooky floating woman in white with long dark hair? Checked. Shambling zombie with red eyes? Checked Giant blobs? Birdy blobs and floating hands? This show sounds like something you would love, as you loooove youkai anime and manga.

It will hit you right in the feels. The moral life lessons in most of the episodes of Youkai Apartment no Yuuga na Nichijou tend to be grounded in reality despite the monsters and magical elements always being in the background. The ideas of not giving up and standing up for what you believe is right are just some of the examples of morality to be found.

So is there a lot of action, magic and fights in the show? No, this was, in my opinion, another strong point of the show. Despite most shows with demons, spirits and magical books that contain summoned beings, Youkai Apartment no Yuuga na Nichijou keeps everything lighthearted and calm all the way through. There were episodes that dealt with evil spirits and exorcism

In Conclusion, while it has magical elements and monsters embedded into the narrative, Youkai Apartment no Yuuga na Nichijou doesn’t rely heavily on those themes. Instead, each episode of Youkai Apartment no Yuuga na Nichijou feels heartwarming and moralistic. It like the fantasy elements are just tools to tell a good story. You are correct sensei