I’ll first start by saying I love this series due to how over the top everything is. It’s the definition of “turn your brain off and it becomes awesome” anime, a popcorn anime in the most affectionate of definitions.

END_OF_DOCUMENT_TOKEN_TO_BE_REPLACED

There are two genres that I frequently watches: Harem and and fantasy school comedies, and then last season two of those things gave birth to a  child is the form of Jitsu wa Watashi wa. The first episode was quite deceptive, we met the weak male MC. the unobtainable love interest, the pushy childhood friend and wince at the past failures. All these things are pretty generic, but please don’t drop it because a few episodes in and you will find a few marvellous things about Aishi and the girls that are around him

END_OF_DOCUMENT_TOKEN_TO_BE_REPLACED

This show caught my attention with it being a fantasy show and not set in a school for a change. The show has this unique art style that takes in Azatec art.

END_OF_DOCUMENT_TOKEN_TO_BE_REPLACED

This anime is funny and simple, but it works, it has cast of good-hearted characters and straight forward story. The Dandelion family is Royal, but you would never be able to tell this if you meet any of them on the streets. They look and act like normal people, except for the fact that each has a unique power.  Their  abilities that range from gravity manipulation to teleportation.

END_OF_DOCUMENT_TOKEN_TO_BE_REPLACED

Gangsta starting this season with its dark streets filled with hitmen, crime lords and prostitutes. I like this show because it is a similar to other favourites of mine: Black Lagoon and Jormungand.  END_OF_DOCUMENT_TOKEN_TO_BE_REPLACED

The case of Twenty Faces comes to an end. An anime based on the works of Edogawa Ranpo, an author who popularized mysteries for the Japanese audience. His works range from simply mystifying to downright terrifying–one of my favorite short stories was actually the inspiration to this anime’s opening episode, “The Human Chair.” After watching the opening, I assumed that the rest of the show would follow in kind, with each week showcasing another one of Ranpo’s short stories as self-contained episodes. While this was true to an extent, instead of jumping between multiple unique works, the show instead chose to feature the connected tales of the Fiend with Twenty Faces.

END_OF_DOCUMENT_TOKEN_TO_BE_REPLACED

After two cours of episodes are completed, I finally finished this sweet and lovely romantic comedy. It was given enough episodes to address all the development within the anine–a perfect span of time to establish the strong relationships–romantic, friendly, and familial–and touch on most of the show’s individual characters. END_OF_DOCUMENT_TOKEN_TO_BE_REPLACED

Why should you watch Arslan Senki? If you want a show that has talks about war, told in an interesting way,  good characterization, and how a boy becomes a king, then you are in for a treat. END_OF_DOCUMENT_TOKEN_TO_BE_REPLACED

There’s absolutely no way that Shokugeki no Souma is finished here, as there’s plenty of manga material to move on with a second, or even third season in the near future. We have to just wait in anticipation of tasting Souma and his friend’s food again. The first season was a blast from start to finish.

Seeing the manga  animated in just a way makes me laugh a lot. The way oall the mangs pages  all come to life on the screen proved just how much better food suits not just a visual sense, but also auditory sensations. The one limitation of our TV screens were not being able to taste or smell the food.

Souma repeatedly takes his diner dishes to the next level by incorporating newly learned techniques, elevating them to tables serving both regular and higher social classes. 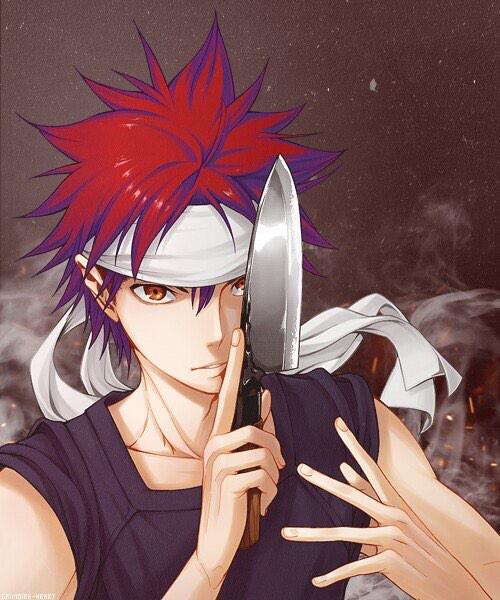 The best thing for me this second season, is the development of Natsu and Ei-chan’s relationship. The series’s creators allowed Natsu to confess her feelings to Ei-chan without dragging it on like other shows. In the first season, Natsu became Maruo’s drive to improve in tennis, but their relationship was just friends. Now,  they have become closes in both tennis and romance. This season has shown us that love in the same field can also play a huge part in developing a person’s focus and determination to overcome any trial in their path.

Aside from his romance, Maruo also have a wide cast of talented players to learn from and compete against. In this season, Maruo was able to play head to head with a a lot of these players, as prove of his rapid growth. The way Maruo carefully analyses both himself and his opponents in the matches.   One of my absolute favorite arcs covered his match against Takagi Sakuya where Maruo struggled to control his emotions and harness the stress of playing such an underhanded tennis player.

The ending of this season was very much to my liking. It ended in a extremely close match with Nabade-kun, as a reflection of their match in season 1 and how much Ei-chan has grown over the course of two seasons.