Your Otaku writer Tantei here. This is the first recipe of the blog.

END_OF_DOCUMENT_TOKEN_TO_BE_REPLACED

An immensely popular series about being stuck inside a video game. So why not make an actual game out of it? Makes perfect sense. END_OF_DOCUMENT_TOKEN_TO_BE_REPLACED

Superheroes, Kaijuu, Super Sentai. All 3 have been long cherished by comic book guys and nerds alike around the world. But what if they were real? What if they existed at the same time in our normal day to day lives. How will we react? This is the world of Concrete Revolutio. An anime original by studio Bones. it was split between the Fall 2015 and Spring 2016 seasons, running for a total of 24 episodes. Initially, when I picked up the first half, Concrete didn’t exactly impress me. It wasn’t awful, but the early episodes were not exactly a great first impression for what was to come. And what did come is probably one of the most underappreciated anime of the past few years.
END_OF_DOCUMENT_TOKEN_TO_BE_REPLACED 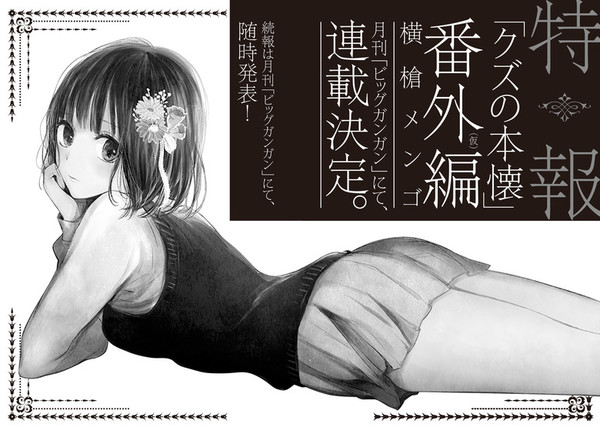 The April issue of Square Enix‘s Big Gangan magazine revealed on March 25 that Mengo Yokoyari will launch a spinoff manga of her Scum’s Wish (Kuzu no Honkai) manga. The magazine will announce more information on the manga in the future END_OF_DOCUMENT_TOKEN_TO_BE_REPLACED

Khara, the studio behind director Hideaki Anno‘s new Evangelion films, confirmed on Wednesday that the next Shin Evangelion project is in production. END_OF_DOCUMENT_TOKEN_TO_BE_REPLACED

I have recently suffered a deep and public betrayal by a friend. I won’t go into details to bore you. I am making some assumption about you guys here: I think most of my readers read a manga or watch anime. If not, I am do apologise. We all have seen in anime like Naruto, Gintama, Trigun, Iron Blood Orphans that enemies are easier to deal with then backstabbing friends.  I am still shocked with how my friend humiliated on social media even if I I am to blame for it. END_OF_DOCUMENT_TOKEN_TO_BE_REPLACED

The first season of Jojo’s Bizarre Adventure is truly epic. It’s not like your typical shounen anime where the story drags on too long and feels like its overstaying it’s welcome. The first two arcs seriously felt like an epic. Not like it’s overly awesome, I mean epic as in Beowulf vs Grendel. It’s really about a story of heroism and amazing manliness in the pages of a manga. The anime captured the appeal wonderfully as you witness Jonathan and Joseph Joestar duke it out with a bunch of immortal vampires. END_OF_DOCUMENT_TOKEN_TO_BE_REPLACED