This is the story of dictionary making and a guide on life. Wow, you sound deep and intelligent, can’t wait to see you fail. Thanks for the vote of confident sensei. Well, let get into this amazing slice of life about dictionary making. It is Bakuman for making dictionaries, which is brilliant

Majime Mitsuya s a shy, introverted man with a passion for words and an innate difficulty to express himself verbally. He wastes his talent working as a salesman for a publishing company called Genbu Shobo. When a veteran editor of the company’s dictionary department, Araki Kouhei decides to retire, he goes out in pursuit of the perfect successor that can help the rest of his team conclude their magnus opus, a modern Japanese dictionary called ‘The Great Passage.’ With the help of another editor, Nishioka Misashi, who finds Majime and recruits him in the team. The anime follows the dictionary editorial team as they work hard to create a dictionary that will help people express themselves in this modern age. 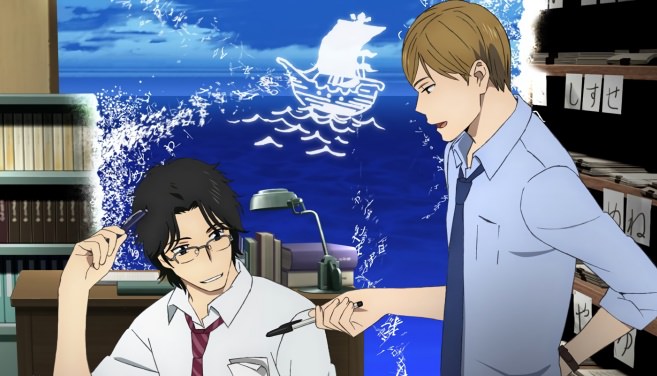 Let sensei, cut in here: When something that is difficult not to get noticed, right Tanteikid94? It takes a very boring theme about dictionary making, something not understood well, but is very important to our culture and heritage. This anime has made dictionary profoundly interesting for the two of us. The value of this anime doesn’t lie with the characters as individual cast members or the entertainment the whole show, but rather the focus in the dynamics of the characters’ interaction as they try to make the “Great Passage.”

Back to me, Fune Wo Amu is what we would get when the anime medium goes beyond its normal expectations to make an artistic piece, that will have a long-lasting impact on the works that will follow it. This is a show that doesn’t need amazing action, fanservice or moe to be good (disclaimer: I and sensei enjoy all these things, so we are not hating them.)  It is just that it takes our breath away when anime breaks it shackles and evolves into art. 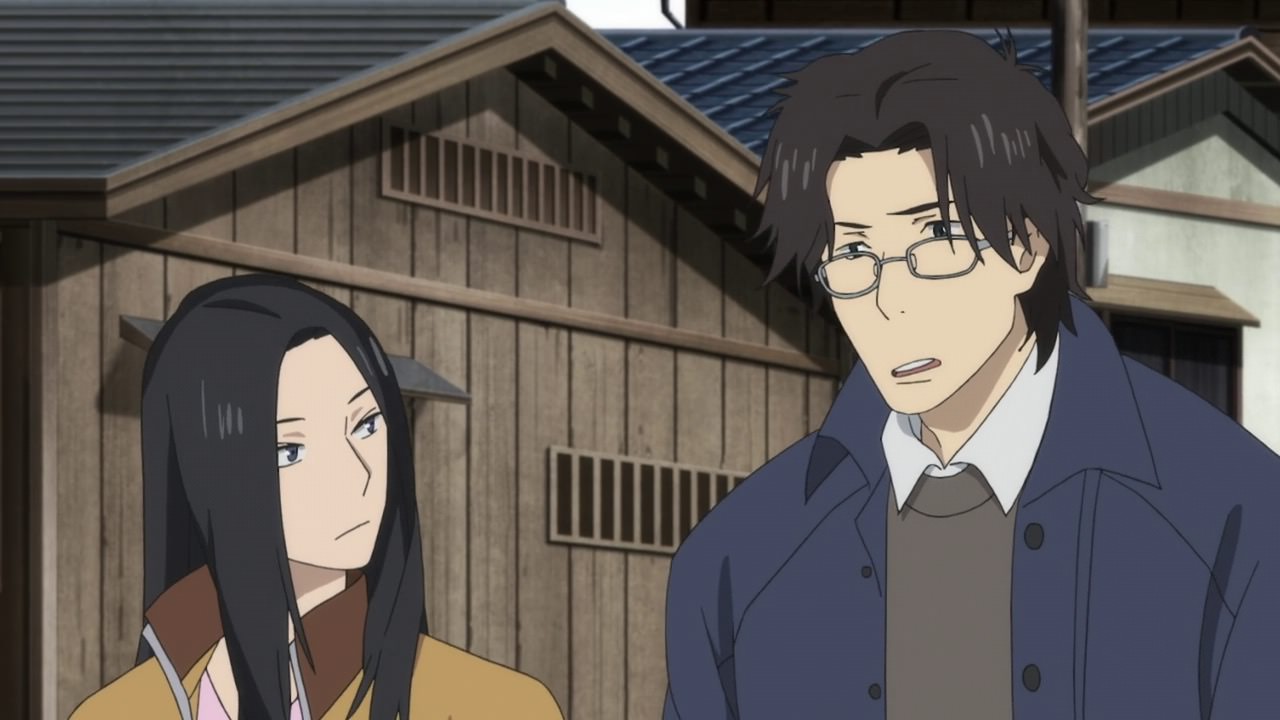 If I was to get a basic description of this show, I would call it a “pie of life” show. It covers the day to day of a dictionary making department. The struggles and successes of these editors when they try to create a modern Japanese dictionary. The premise is simple and the characters likable and realistic.  Nothing really extraordinary happens, the hurdles they go through are not extravagant and their conversations are life-like and convincing to me and sensei.

When me and sensei, think about the art and music of this anime. We have to say that both the art and music of Fune wo Amu were exactly what the story needed in order to shine. Clear character expressions, adequate background drawings, and great allegorical scenes. The music direction by Ike Yoshihiro made sure that the right tunes were placed at relevant scenes. The voice acting was amazing, and in unison with the realistic facial expressions and the exemplary writing, gave the characters the necessary lifelike attribute that the story demanded.

There are fun little cut-in segments in each episode call Words of the Episode and Dictionary Half-Time.  Sensei, you thought the little dictionaries were adorable right? Yes, they were

Word of the Episode: Each episode is titled after a single word that also serves as the theme. At the end of the episode, the word is given in dictionary form, complete with meaning and example sentence.

Dictionary Half-Time: The half-time breaks feature a group of different anthropomorphized dictionaries who give a small lesson about dictionaries and how each one of them is different from the other. As the little dictionaries say themselves, ‘Every dictionary has its own personality.’ These chibis dictionaries were amazingly cute.

A show that will probably always stand out as a welcome exception in the anime medium, rather than the rule. How is that not a show worth watching?

4 thoughts on “Fune wo Amu, Bakuman of Making dictionaries”